Find out more about Sinkhole damages and how they can occur

Sinkhole damage can be easy or hard to spot, read more to find how you can better determine if your house has suffered from sinkhole damage and what options you have to remedy the issue.

It’s important to understand what options you as the policy holder have for sinkhole repair and who should be involved to get the issue fixed without fighting the insurance company. Not handling the claim properly can result in a prolonged problem, improper repair, devalued property, and wasted time.

TEST YOUR HOUSE. WILL IT PASS? 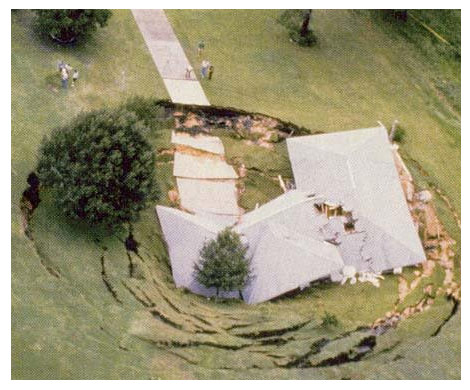 Are you dealing with sinkhole problems, bad drainage, or differential settlement which is the normal settling that happens to a building over time.

Review the building issues below and take a look around your home to determine what may be happening.

THINGS TO CHECK FOR AROUND YOUR HOME:

• Doors and windows that won’t close or open properly
• Progressively sloping floors
• Seeing debris in your water
• Observing depressions in your yard or sagging fencing
• Built in cabinetry that has become unlevel
• Gaps between the cabinetry and the wall
• Excessive utilities bill
• Separation between walls and the ceiling
• Stair step cracks on the interior or exterior of the house
• Dead areas in the yard
• Neighboring retention pond or drainage systems
• Cracks that won’t stop getting bigger.

WHY ARE THESE THINGS IMPORTANT TO LOOK FOR?
WHAT DO THEY MEAN?

Houses settle over time and it’s important to recognize the issues that can plague a house when a sinkhole may be occurring.

Doors and Windows:
If your doors or windows in your home don’t open or close properly that could be a sign that the foundation or framing of the house has shifted and won’t allow the door or window to function properly.

Sloping floors:
Progressively sloping floors can indicate that the foundation of your house is not sitting on stable ground.

Debris in the water:
Pipes carrying debris may have been ruptured by a shifting foundation

Depressions in yard or sagging fencing:
If a depression is opening in your yard, the soil in the ground may be giving way, sometimes you may see a sagging fence because the ground has become unstable.

Cabinetry:
Built in cabinetry can also show signs of stress. If the cabinets in your bathroom or kitchen are pulling away from the wall or showing cracks between the cabinet and the wall that may indicate that the walls have shifted.

Excessive utilities bill:
If a pipe has burst or cracked under your houses foundation due to the ground settling this could result in abnormally high utilities bills.

Separation between walls and ceiling:
A shifting foundation can affect the frame of a house and cause the walls to show signs of pulling from the roof. This may result in cracks.

Stair step cracks:
Stair step cracks are more common with block home construction and show that the house is experiencing tension from one direction or another. The crack looks like a pair of stairs going up the wall.

Dead areas in the yard:
If the ground has shifted enough that there is no soil left to hold water, plants and vegetation may begin to wilt or die.

Retention ponds:
It is wise to be mindful of neighboring retention ponds and how they drain. If there is a poor drainage near your home this could result in issues for the foundation though not necessarily a sinkhole.

Growing cracks:
Keep an eye on cracks in the walls in your house, if they continue to grow then the walls are shifting.

Generally these issues combined may indicate a sinkhole problem. Rest easier call HDG to get an evaluation at 813-770-5415.

GET A FREE CLAIM REVIEW TODAY! 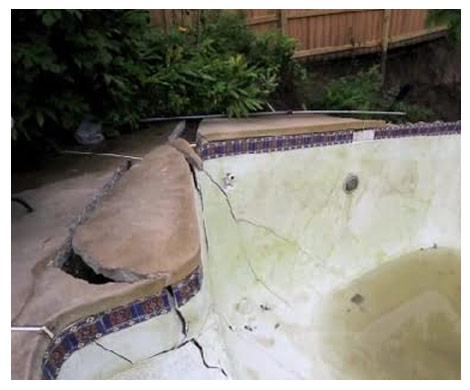 In 2011 a new insurance bill passed in the Florida Legislature that redefines sinkhole insurance coverage.  Due to the high number of fraudulent cases of sinkhole activity and the difficulties of verifying sinkhole related damage the legislation was rewritten in 2011.

The new legislation has made sinkhole insurance for homeowners optional or a separate rider on their home insurance policy.  On the other side of the fence, the insurance companies are not required provide coverage as they are allowed to opt out entirely.   Now each policyholder needs to determine if sink hole coverage is worth the risk since the new requirements of what constitutes a sinkhole are much more strict.

Please see below for more detail regarding the 2011 Legislature:

According to Chapter 627.706
(1)(a) Every insurer authorized to transact property insurance in this state must provide coverage for a catastrophic ground cover collapse.

(a) “Catastrophic ground cover collapse” means geological activity that results in all the following:
1. The abrupt collapse of the ground cover;
2. A depression in the ground cover clearly visible to the naked eye;
3. Structural damage to the covered building, including the foundation; and
4. The insured structure being condemned and ordered to be vacated by the governmental agency authorized by law to issue such an order for that structure.

(h) “Sinkhole” means a landform created by subsidence of soil, sediment, or rock as underlying strata are dissolved by groundwater. A sinkhole forms by collapse into subterranean voids created by dissolution of limestone or dolostone or by subsidence as these strata are dissolved.
(i) “Sinkhole activity” means settlement or systematic weakening of the earth supporting the covered building only if the settlement or systematic weakening results from contemporaneous movement or raveling of soils, sediments, or rock materials into subterranean voids created by the effect of water on a limestone or similar rock formation.
(j) “Sinkhole loss” means structural damage to the covered building, including the foundation, caused by sinkhole activity. Contents coverage and additional living expenses apply only if there is structural damage to the covered building caused by sinkhole activity.
(k) “Structural damage” means a covered building, regardless of the date of its construction, has experienced the following:

3-Damage that results in listing, leaning, or buckling of the exterior load-bearing walls or other vertical primary structural members to such an extent that a plumb line passing through the center of gravity does not fall inside the middle one-third of the base as defined within the Florida Building Code;

5-Damage occurring on or after October 15, 2005, that qualifies as “substantial structural damage” as defined in the Florida Building Code.

WHAT YOU NEED TO KNOW

Inspecting & Determining Sinkhole Signs & Damage. You have to do a self-assessment looking for potential signs of damages related to sinkhole.

Filing a Sinkhole Claim, documenting damages and determining what kind of coverage you have. A phone call to the insurance company starts the documentation and investigation. Be sure to write as much information as possible about the agent in the other line, this will help you identify who you talked to in every process of the claim.

Insurance Company’s will send an Adjuster for an Inspection; they will collect photos, document the property damage, and ask questions and do a recorded statement, like a mini-examination under oath. Questions range from information about your mortgage, your home data, past claims, and more, what you say and do during this statement may hurt your claim or make the claim process longer.

Engineering Site Inspection: Some testing and inspection may be scheduled such as the following, the floor elevation, hand auger borings, electrical resistivity testing, ground penetrating radar, etc. This test is very useful to scope the damages from your home level to about ten feet underground.

The final tests consist of drilling. Testing is done by the insurance company. Be sure to document if they drill in the correct spots sometimes you may get a lot of drilling done – but if it is not done correctly or in the right spots – , then you may be left without a case and with the same problem.

Sinkhole Report: After the drilling the insurance company will issue you the sinkhole report, this may take up to three months. If a sinkhole does exist, the insurance company will have a plan of action. If sinkhole damage does not exist, the report will provide information about shrink swell clays, differential settlement, or other types of damage like clay problems. If sinkhole does exist it will have a remediation plan.

Confirmed Sinkhole Claim: Your options are to fix the house according to the insurance recommendations, fight for other recommendations such as underpinning, or to look for cash settlement. The important things to know are what am I entitled to based on my damages and how can I maximize recovery.

Denied Sinkhole Claim: Get a second opinion, in most cases the primary report could be wrong or an inappropriate report. If your first claim is denied – Let’s work to obtain a second look, shoot for another inspection.

There are three main types of sinkholes that occur in Florida. Solution, Cover-Collapse, and Cover-Subsidence Sinkholes.

The first type is called a Solution sinkhole and happens when the surface layer of soil is thin and close to the limestone underneath. Water will run downward through the voids in the limestone and cause a depression. Sometimes these depressions happen over a period of years and sometimes they happen quickly in a matter of months.

The second type is called a Cover-Collapse sinkhole, and as the name implies is a cavity, that opens up underground and is covered by the soil above until the point of collapse. Water makes it way into underground cavities and fills them up eroding the structure which is commonly clay. After the cavity is full of water any drop in the water table or excess water may destroy the delicate structure in place and collapse leaving whatever is on top to fall into the cavity created underground that is now exposed.